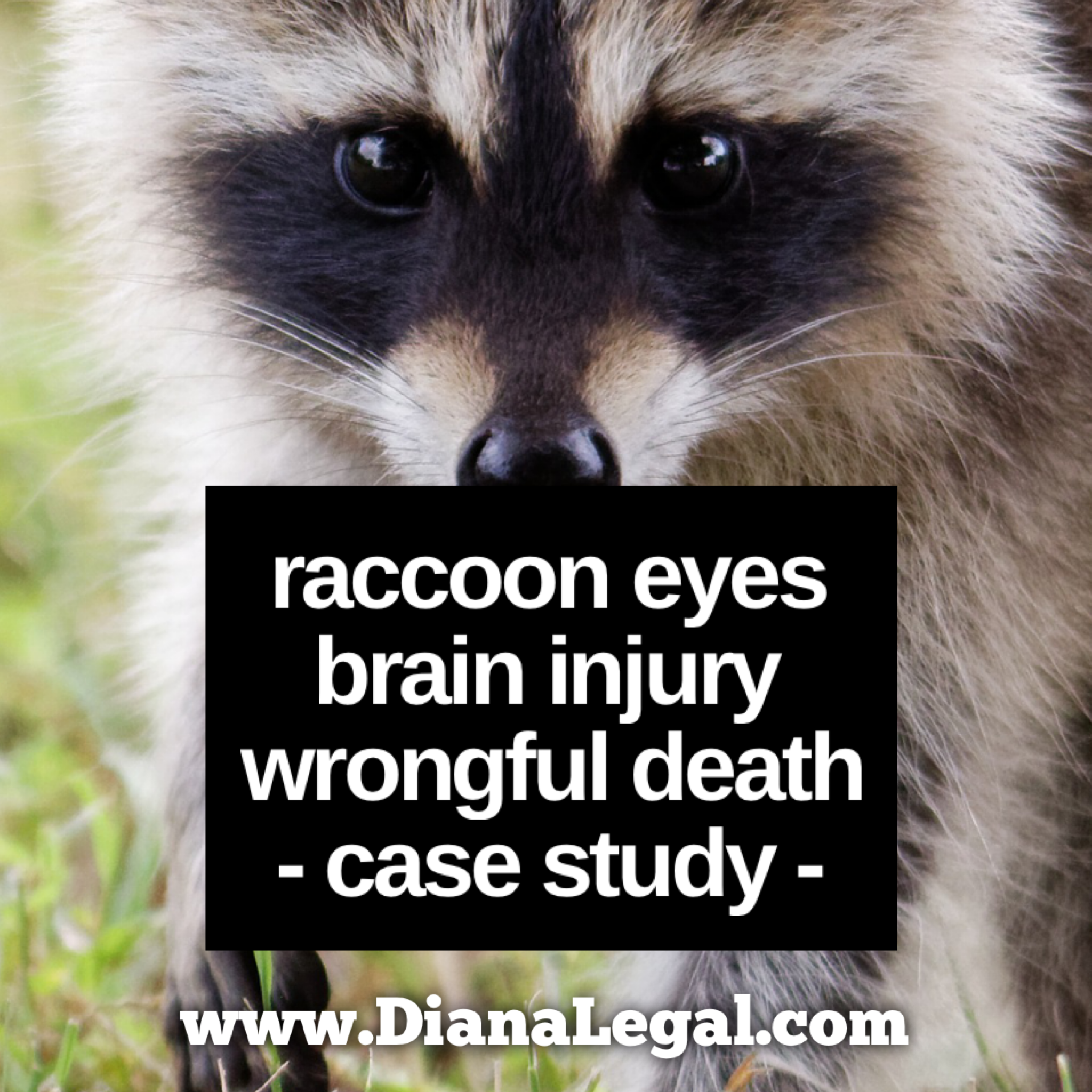 Raccoon eyes, is a common term used to refer to periorbital ecchymosis, which is caused by blood tracking into the periorbital tissues.  Raccoon eyes also referred to as panda eyes, is often observed following a violent blow to the head and is an indication of a sustained brain injury.

Raccoon eyes are caused by bleeding into the skin around the eyes, and looks similar to a “black eye”. Bruises around both eyes is a symptom of internal bleeding, and in instances of a car accidents, slip and fall case, child abuse, fall risk or other personal injuries, raccoon eyes or periorbital ecchymosis, is a hallmark indication of a head trauma generally resulting from a blunt blow to the head.

Plaintiff Casey Dalton placed her four-year-old son, Dirk Dalton, in temporary foster care for three weeks to enter a drug and alcohol treatment facility. During the seventeen days in the foster home, Dirk Dalton was subject to egregious child abuse by his foster father, Kirk Cross.

Dirk Dalton was entrusted into the foster care system, and the state licensed the Cross family as foster parents, despite the fact that the foster father, had a known propensity to abuse children. During his time in foster care, Dirk was subject to egregious child abuse and evidence indicated that Dirk was most likely struck on the back of his head, by his foster father while he was wearing a large ring. The cranial impact caused a brain injury to the minor child which was objectively evident by the existence of raccoon eyes.

Twelve-days after being admitted into foster care, four-year-old Dirk was admitted to the emergency room, where physicians notated two cerebral lacerations on the top of Dirk’s head. At this time there was bruising around the eyes, specifically the notation of raccoon eyes, which served as evidence that the minor sustained blunt trauma to the head.

The following day, school staff at Washington State funded Head Start School noticed bruising and swelling in the left temple area of Dirk’s head. The school did not report suspicions of child abuse to the state.  School staff called Dirk’s foster parents so the child could be taken to the hospital. Dirk was admitted to the emergency room and treating physicians notated subgaleal hematoma, scalp bleeding usually associated with head trauma.  Again the minor child was discharged.

Two days later, Dirk was back in the emergency room, for a fourth visit, due to increased bruising and swelling in the right temple area and visible signs of periorbital ecchymosis (raccoon eyes). The treating physician, notated raccoon eyes and the increased size of the subgaleal hematoma and ordered a CT scan which was negative for intracranial injury. Ultimately Dirk was discharged and placed under the care of his abusive foster parents. The following day on May 1, 1994, at approximately 11:30 AM, 4-year-old Dirk Dalton wrongfully died. While the cause of death was not the brain injury itself, it was a result of child abuse which occurred in the foster home.

Ultimately Plaintiff Casey Dalton and the Estate of Dirk Dalton sued several defendants for Dirk’s wrongful death; including: (1) the State of Washington for negligently licensing the foster parents; and (2) the foster parents themselves for child abuse.

This matter was litigated in Asotin, Washington and was closely followed by the Lewiston Tribune,  in Lewiston, Idaho from the origination of the story back in 1994 to the civil litigation that commenced in 2000.

Child Abuse Cases and School Abuse articles are linked below:

Wrongful Death Articles are linked below:

Do you have a Wrongful Death case or a Brain Injury matter to discuss?