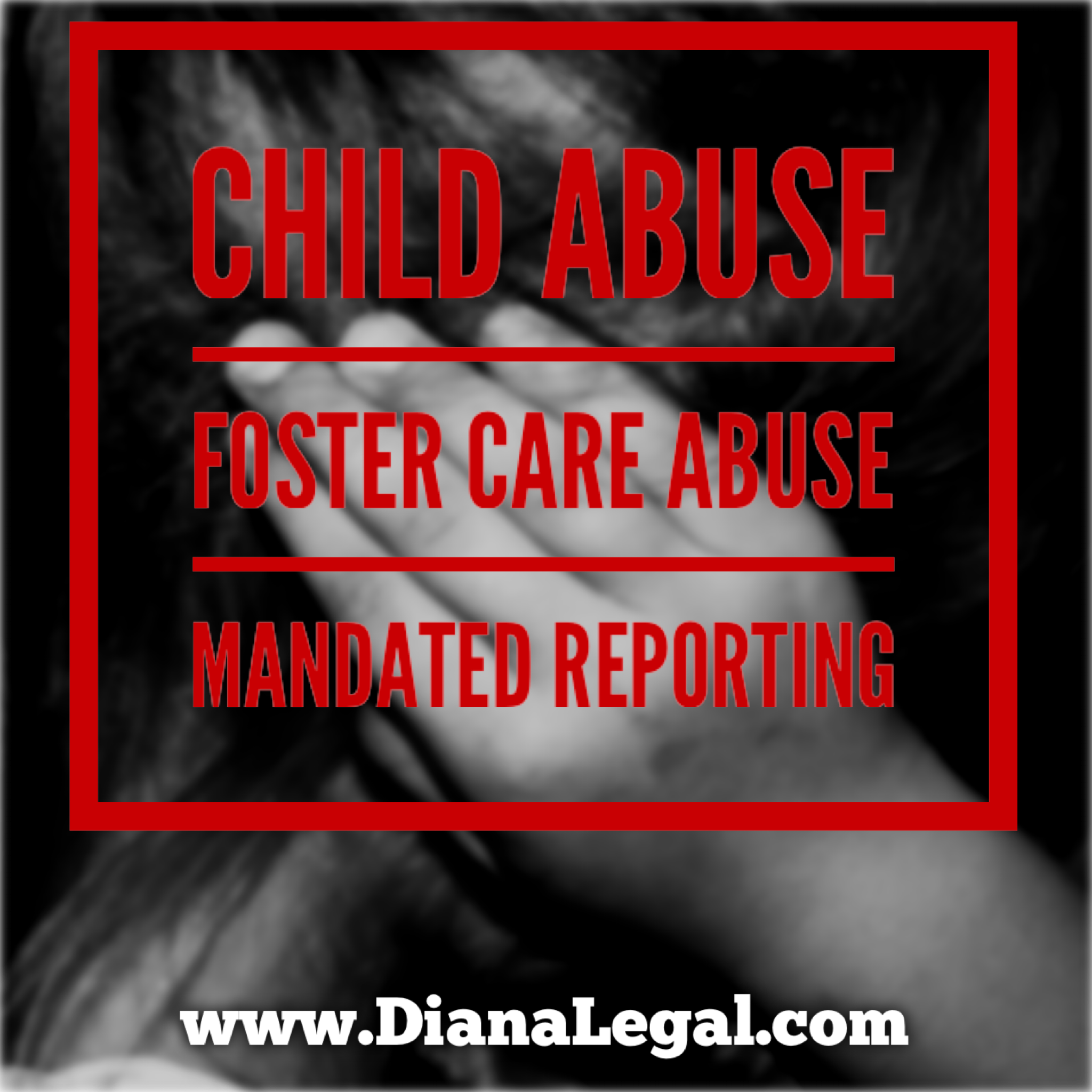 Child abuse and neglect, according to the US Department of Health and Human Services, is defined as an act or failure of a parent to caretaker, which results in death, serious physical and emotional harm, sexual abuse, or exploitation of a child; or an act or failure to act which presents an imminent risk of such serious harm.

Mandated Reporting the Reporting of Child Abuse or Neglect

Government entities and some community members have the important role of protecting children from abuse and neglect. These entities and individuals are known as mandated reporters. A person whose profession qualifies them as “mandated reporters” of child abuse or neglect, as an inherent part of their profession and employment, must by law report all known or suspected cases of child abuse or neglect.

Dirk Dalton, a four-year-old boy, died after seventeen days in foster care. Dirk Dalton’s mother and the estate of the minor foster child brought forth a wrongful death suit alleging child abuse by the foster parents and seeking compensation from the school and hospital for failure to follow mandated reporting laws.  While in foster care, the foster father, with a known propensity to abuse children, physically abused the child with such severity that he was admitted to the hospital on four different occasions within a six-day period.

Plaintiff Casey Dalton, mother of the minor child, placed her four-year-old son, Dirk Dalton, in temporary foster care for three weeks to enter a drug and alcohol treatment facility. During the seventeen days in the foster home, Dirk Dalton was subject to egregious child abuse by his foster parent, Kirk Cross.

First, on April 25, 1994, the 4-year-old was taken by his foster mother, Kim Cross-Berry, to the hospital where treating physicians notated multiple bruises on various parts of the minor’s body. To cover the abuse happening in the foster home, Ms. Berry alleged that Dirk had been injured on carnival rides at the Asotin County Fair. Treating physicians discharge the minor patient and failed to report any potential child abuse in the foster home.

Shortly thereafter, exactly two-days later, on April 27, 1994, Ms. Berry again took Dirk to the emergency room, where physicians notated two cerebral lacerations on the top of Dirk’s head. Once again, to disguise the abuse happening in the foster home, Ms. Berry advised that the 4-year-old boy fell off a bunk bed on to matchbox cars. Treating physicians treated the wound, did not conduct a full body examination, and again discharge Dirk to be placed under the care of his abusive foster parents. Here the hospital again failed to follow mandated reporting laws.

The following day on April 28, 1994, school staff at Washington State funded Head Start School noticed bruising and swelling in the left temple area of Dirk’s head. Rather than reporting suspicions of child abuse to the state, the school staff called Dirk’s foster parents so the child could be taken to the hospital for a third time. The school in this case has sufficient evidence to suspect child abuse yet they failed to report per mandatory reporting laws.

On April 28, 1994, foster father, Kirk Cross, and the child’s abuser, took 4-year-old Dirk to the hospital for a third visit in four days. The treating physician notated a subgaleal hematoma, scalp bleeding usually associated with head trauma.  On this third hospital visit the physician failed to conduct a full body examination, failed to report any suspicion of child abuse, and once again discharge the 4-year-old patient to be placed under the “care” of his foster parents.

Two days later, on April 30, 1994, Ms. Berry, the foster mother took Dirk back to the hospital for a fourth visit due to increased bruising and swelling in the right temple area and his visible signs of periorbital ecchymosis (raccoon eyes). The treating physician, notating both raccoon eyes and the increased size of the subgaleal hematoma, ordered a CT scan which was negative for intracranial injury. For a fourth time, the hospital and treating physicians failed to report any suspicions of child abuse and discharged the minor patient to be placed under the care of his abusive foster parents.

The following day on May 1, 1994, at approximately 11:30 AM, 4-year-old Dirk Dalton died. The autopsy report confirmed that the cause of death was a ruptured duodenum resulting from blunt trauma.

During his short stay in the Cross’ foster home, 4-year-old Dirk Dolton was taken to the emergency room on four occasions prior to his death. In this instance treating physicians, as mandated reporters, had an obligation to report suspected child abuse, yet on four occasions failed to do so, otherwise breaching their obligations.

At trial evidence established that foster father, Kirk Cross had a criminal history and was known to be abusive to children. Specifically, he would strike children on the top of their head with a large class ring. Despite the Crosses’ known history of child abuse, the state licensed the Crosses’ and permitted them to serve as foster parents, only a few weeks prior to Dirk Dolton’s wrongful death.

At trial evidence further established that school staff noticed that Dirk Dolton was reluctant to get on the bus to go home at the end of the day and as the school day came to an end, he would cling to the teachers rather than play with other children. In the 17-day period in which Dirk Dalton was in foster care he would cry and resist leaving school. On several occasions, Dirk would be carried off the bus when returning to the Cross’ foster home, which was in stark contrast to the mornings when he would happily get on the school bus to head to school. While the bus driver and the school noticed this unique behavior, the school failed to report suspected child abuse, despite their mandated reporting obligation.

Ultimately Plaintiff Casey Dalton and the Estate of Dirk Dalton sued several defendants for Dirk’s wrongful death; including: (1) the Hospital for medical malpractice and failure to perform their mandated reporting obligations; (2) the State of Washington for negligently licensing the Crosses as foster parents; and (3) the Head Start for failing to report suspected child abuse despite physical and behavioral indications of child abuse.

Although this matter was litigated in Asotin, Washington; the case was closely followed and covered by the Lewiston Tribune,  in Lewiston, Idaho from the origination of the story back in 1994 to the civil litigation that commenced in 2000.

Child Abuse Cases and School Abuse articles are linked below:

Wrongful Death Articles are linked below: