SCHOOL ABUSE I Student Isolation the use of Isolation Rooms give rise to School Liability, including Claims of Assault, Battery, and False Imprisonment 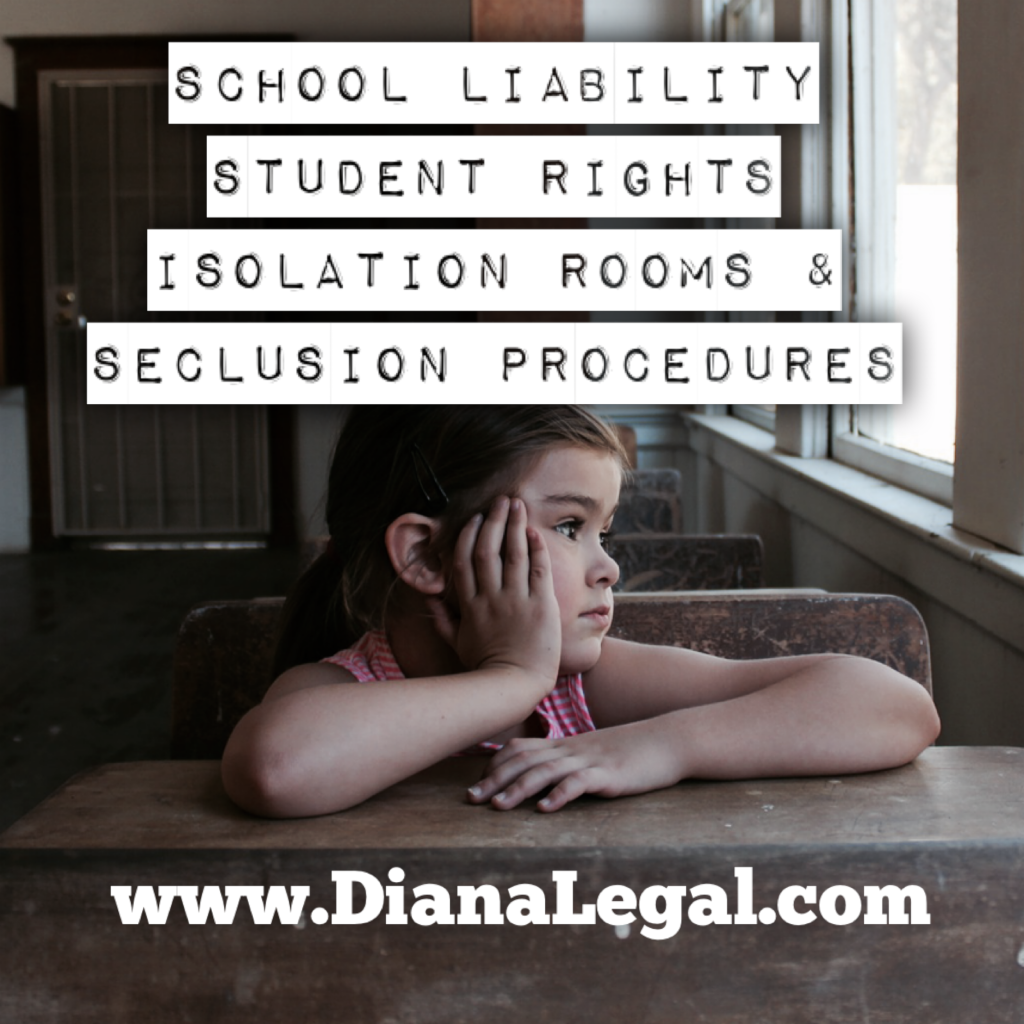 SCHOOL ABUSE I Student Isolation the use of Isolation Rooms give rise to School Liability, including Claims of Assault, Battery, and False Imprisonment

Student Isolation the use of Isolation Rooms give rise to School Liability, including Claims of Assault, Battery, and False Imprisonment

School abuse and specifically the use of unethical seclusion procedures is a growing area of concern. In recent years the use of isolation rooms, calming rooms and other seclusion procedures in public schools throughout the nation has given rise to civil liability. There are ample cases where school districts have been found liable for entrapping students and confining them for prolonged durations of time in isolation. Unfortunately, these egregious practices are often targeted to students with disabilities and those who have Individualized Education Plans (IEP).

Hoping to address these abusive student isolation procedures, Arne Duncan, United States Secretary of Education, commissioned for all states and territories to publicize their policies and procedures when it comes to seclusion procedures, so every student is safe from abusive restraint and unethical seclusion practices. The goal of this report was to encourage the exchange of ideas and best practices between administrators, teachers, and parents with the goal of creating a safe learning environment for students.

“On July 31, 2009, Secretary Duncan sent a letter to the states and territories urging them to develop or review and, if appropriate, revise their state policies and guidelines to ensure that every student in every school under its jurisdiction is safe and protected from being unnecessarily or inappropriately restrained or secluded. He also urged them to publicize these policies and guidelines so that administrators, teachers, and parents understand and consent to the limited circumstances under which these techniques may be used; ensure that parents are notified when these interventions do occur; and provide the resources needed to successfully implement the policies and hold school districts accountable for adhering to the guidelines.

Secretary Duncan also encouraged the states and territories to have their revised policies and guidance in place prior to the start of the 2009-2010 school year to help ensure that no child is subjected to the abusive or potentially deadly use of seclusion or restraint in a school.”

In November 19, 2019 ProPublica Illinois, a nonprofit newsroom focused on investigating abuses of power, published an article titled “The Quiet Rooms”. The article focused on the school abuse shedding light on the fact that school districts were locking terrified children away in rooms and using extreme isolation measures. The investigation addressed how these rooms were given deceptive names such as “reflection rooms”, “cool-down rooms”, “calming rooms” and “quiet rooms”; yet these were the prisons in which minor students were entrapped for hours on end.

Student with Disability was restrained and locked in a “Calming Room”; the School District and Several of their employees and administrators were sued civilly for various causes of action inter alia, Assault, Battery, Intentional Infliction of Emotional Distress, and False Imprisonment.

A disabled student, enrolled in the Iowa public school system back in 2005 and suffered abuse at the hands of school administrators. When the minor students struggled with what administrators deemed “behavioral problems” the school implemented what they called “hand-over-hand” restraints and other forms of physical bodily restraints. During these abusive acts the minor student was observed screaming, urinating on herself and her eyes would glaze over. There were at least five of these instances over a one-year period. Further the school continued to implement these abusive actions when they locked the student in what they called a “calming room” for absurd amounts of time. On one occasion the student was uncooperative in completing her work and she was put on “timeout” that lasted 3 hours and 12 minutes and this time out continued for an additional 25 minutes the following morning. These extensive timeouts continued, and on one occasion a timeout lasted 5 hours and 10 minutes. During these timeouts the disabled student would be placed in a room without furniture, other materials removed and the door locked shut. In addition to a slew of administrative complaints, the parents of the minor disable student brought forth a federal civil claim alleging disability discrimination, assault and battery, false imprisonment, intentional infliction of emotional distress, negligent infliction of emotional distress, and negligence.  D.L. v. Waukee Community School District, 578 F. Supp. 2d 1178 (S.D. Iowa 2008)

Assault, Cause of Action for Assault Due to Abuse in School

A cause of action for assault in civil court, is defined and outline in California Civil Jury Instruction 1301. In the civil setting and assault is an intentional act in which a wrongdoer demonstrates unlawful intent to inflict immediate injury on the person. Plotnik v. Meihaus (2012) 208 Cal. App. 4th 1590, 1603-1604 [146 Cal.Rptr.3d585].

Battery, Cause of Action for Battery Due to Abuse in School

A cause of action for battery in civil court, is defined and outline in California Civil Jury Instructions 1300. “A battery is a violation of an individual’s interest in freedom from intentional, unlawful, harmful or offensive unconsented contacts with his or her person.” Rains v. Superior Court (1984) 150 Cal.App.3d 933, 938 [198 Cal.Rptr. 249].

A cause of action for battery is civil court, is defined and outline in California Civil Jury Instructions 1600. “A cause of action for intentional infliction of emotional distress exists when there is ‘(1) extreme and outrageous conduct by the defendant with the intention of causing, or reckless disregard of the probability of causing, emotional distress;(2) the plaintiff’s suffering severe or extreme emotional distress; and (3) actual and proximate causation of the emotional distress by the defendant’s outrageous conduct.’ A defendant’s conduct is ‘outrageous’ when it is so ‘extreme as to exceed all bounds of that usually tolerated in a civilized community.’ And the defendant’s conduct must be ‘intended to inflict injury or engaged in with the realization that injury will result.’ ” (Hughes v. Pair (2009) 46 Cal.4th 1035,1050-1051 [95 Cal.Rptr.3d 636, 209 P.3d 963])

A cause of action for battery in civil court, is defined and outline in California Civil Jury Instructions 1400. The crime of false imprisonment is defined by Penal Code section 236 as the ‘unlawful violation of the personal liberty of another.’ The tort is identically defined. As we recently formulated it, the tort consists of the ‘“nonconsensual, intentional confinement of a person, without lawful privilege, for an appreciable length of time, however short.” That length of time can be as brief as 15 minutes. Restraint may be effectuated by means of physical force, threat of force or of arrest, confinement by physical barriers, or by means of any other form of unreasonable duress.” Fermino v. Fedco, Inc. (1994) 7 Cal.4th 701, 716 [30Cal.Rptr.2d 18, 872 P.2d 559], internal citations omitted.

School Abuse: Do you have a question about Student Rights or Seclusion Procedures?