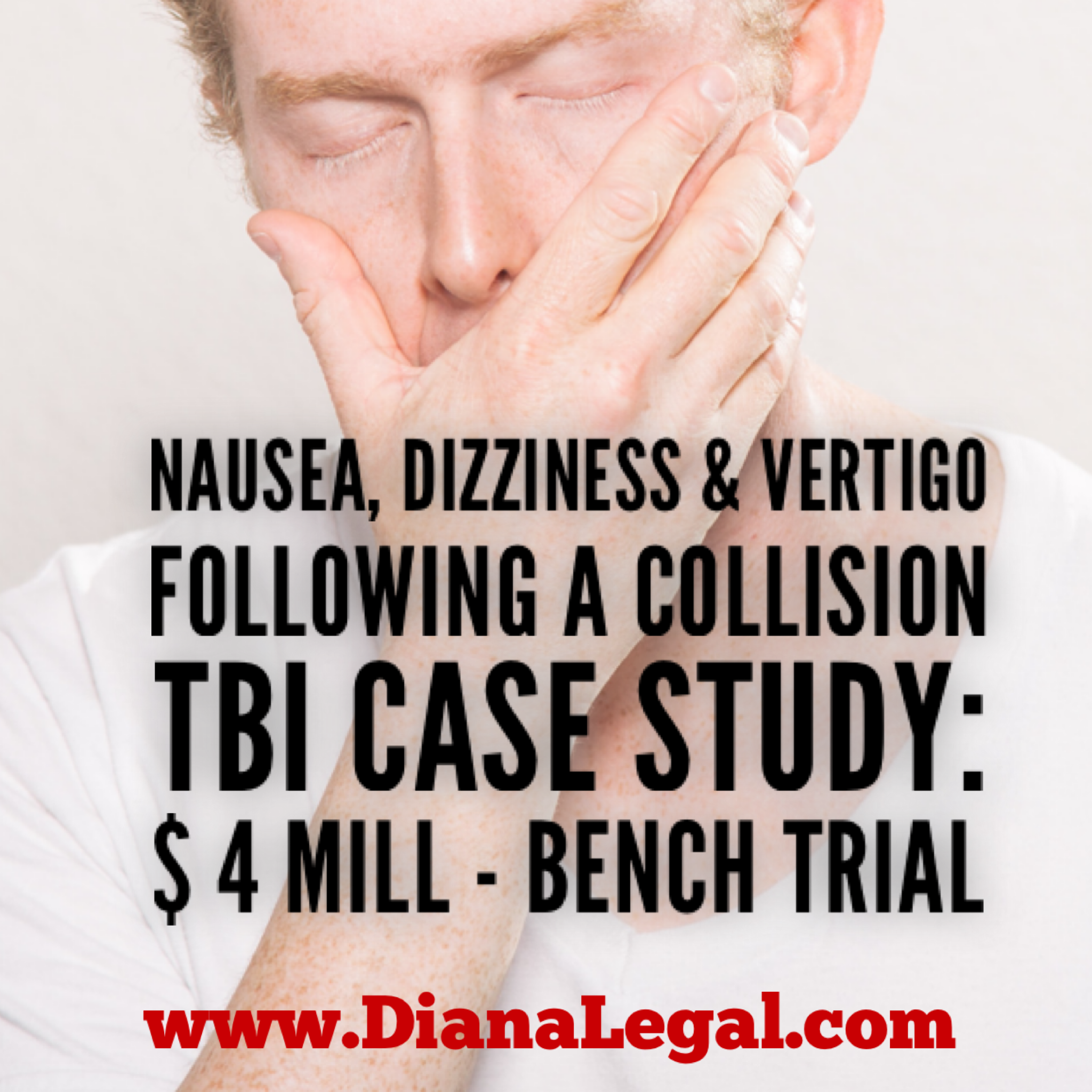 Nausea, dizziness, and vertigo are concussive symptoms that may indicate a traumatic brain injury. Loss consciousness not required for a TBI.

Nausea, dizziness, dizzy spells, vestibular problems, balancing issues, and vertigo are concussive symptoms that may persist following a collision.  Should these multiple concussive symptoms persist following a rear-end collision, a car crash, slip and fall or other incident where there was direct impact to the head or rapid head movement, such symptoms may be an indication of a sustained mild traumatic brain injury or traumatic brain injury.

Nausea, dizziness, dizzy spells, vestibular problems, balancing issues, and vertigo are some concussion symptoms, that if present following a head injury may indicate a moderate to severe TBI. Such symptoms must be reported to treating physicians and monitored throughout the recovery process.

While neurological testing and other objective measures such as lacerations to the head or face, panda eyes or raccoon eyes may assist in making a TBI or mTBI diagnoses, this is not a necessity. Monitoring an injured party following a fall, a motor vehicle accident or other incident resulting in a direct blow to the head can suffice when making a traumatic brain injury diagnosis or a mild traumatic brain injury diagnosis.

When evaluating a patient, a treating provider will look for concussion symptoms and monitor that patient’s progress and recovery. When there are lingering and residual concussion symptoms that have not resolved with the passage of time, then a trained medical provider may make a brain injury diagnosis.

Following a car accident, slip and fall case, child abuse, fall risk or other personal injury incident in which a concussion was sustained, certain physical, emotional, sensory, neurological, and cognitive changes may be experienced. A sudden onset of vestibular problems following a direct impact to the head or rapid head movement may be a strong indication of a TBI or mTBI.

In a recent 2020 bench trial in the case of Rufo v. United States: Plaintiff Rufo a 51-year-old father of five was driving his Passat in stop and go traffic. Rufo, an employee with the Drug Enforcement Administration rear-ended him on a freeway traveling approximately 35 MPH.  Plaintiff Rufo was dazed but did not lose consciousness. Just after the impact, he initially felt he was fine. He exited his vehicle, spoke with both other drivers, and shot video of the damaged vehicle. He also called his wife and supervisor at work. However, by the time CHP officers arrived, he had pain in his neck and felt nauseous.

He was transported to the hospital. CT imaging did not reveal a brain bleed or any other abnormalities. The emergency room physician did not diagnose him with anything other than a neck strain with headache. Over the ensuing hours and days, Mr. Rufo developed multiple concussive symptoms which have persisted since the collision, including balance issues and dizziness. That as a direct result of the incident, plaintiff suffered life-altering injuries. The plaintiff sustained a mild traumatic brain injury that resulted in vestibular problems, dizziness, headaches, balance issues, and vertigo. In addition, he had chronic neck pain. The parties went to mediation in this case at Judicate West before neutral Mr. Jay Cordell Horton, at the time Plaintiff indicated a settlement offer needed to be more than $3 million and the defense offered $700,000. The case did not settle.

At the expediated bench trial which lasted 2 days, the court limited the plaintiff to 6 hours to present evidence and the defense to 5 hours. After a mere 11 hours the court issued an award of $4,099,581.80.

Concussion Symptoms or Do you have a Brain Injury matter to discuss?