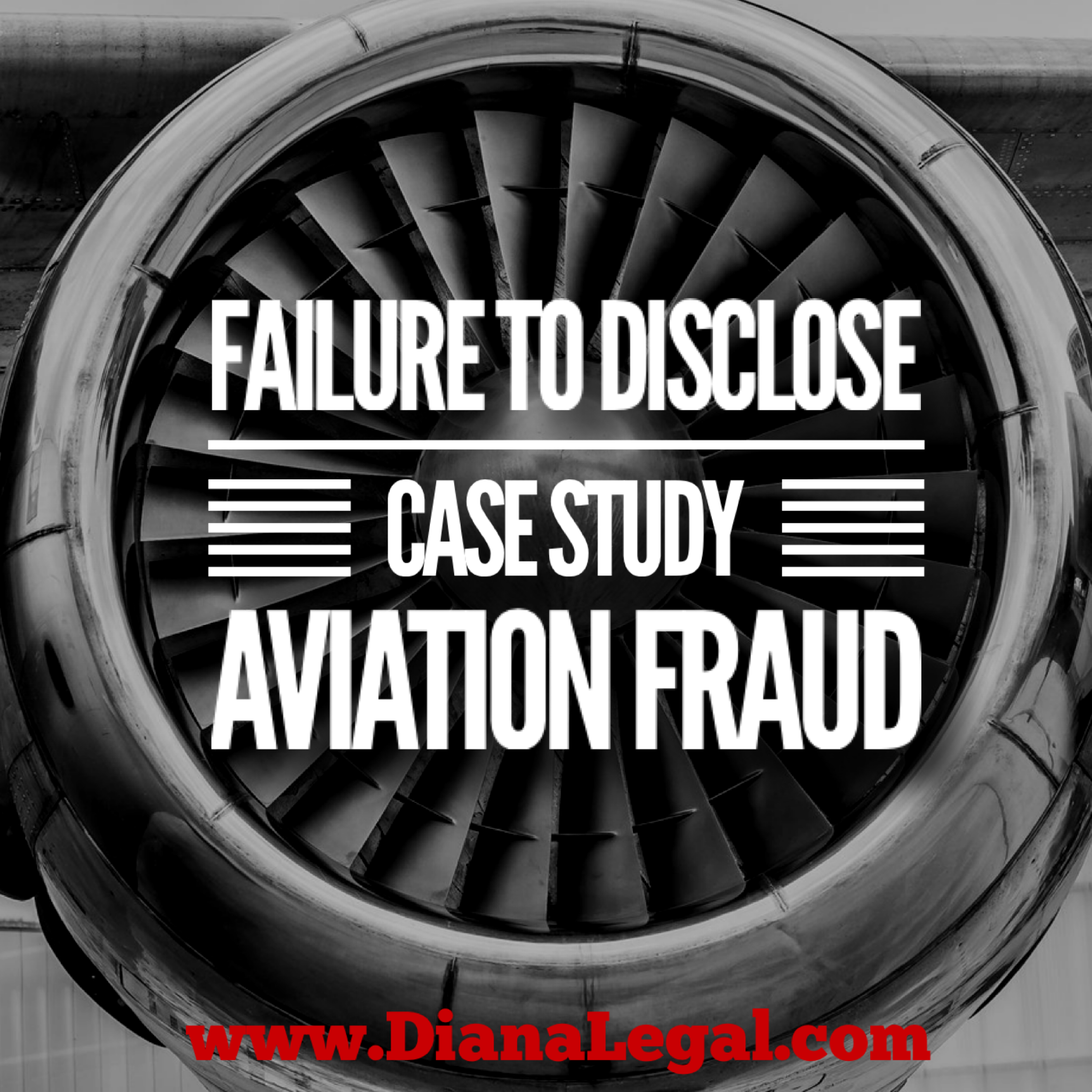 Failure to disclose is a civil fraud when a seller has an obligation to disclose an essential fact yet suppresses that information.

Failure to Disclose a Civil Fraud

Failure to Disclose as Fraudulent Concealment

California Civil Code Section 1710(3): encapsulates legal liability for fraud via concealment fraud or fraudulently concealment as follows: “A deceit, within the meaning of the last section, is … [Intentionally Omitted] …  3. The suppression of a fact, by one who is bound to disclose it, or who gives information of other facts which are likely to mislead for want of communication of that fact.”

Failure to Disclose as Intentional Fraud

California Civil Code Section 1709: encapsulates legal liability for Intentional Fraud and Deceit as follows: “One who willfully deceives another with intent to induce him to alter his position to his injury or risk, is liable for any damage which he thereby suffers”

Aviation Fraud a Case Study: Jet Engine Manufacturer is found liable for Fraud, due to their Failure to Disclose a Known Defect, Plaintiff Awarded $1,295,627.00 in Compensatory Damages

The corporate plaintiff purchased a jet with two of the defendant’s engines in either 2004 or 2005. In January of 2011, after the engine warranty expired, the plaintiff discovered that the blade retainers in both engines of the corporate jet were defective causing downstream engine damage.

Per the plaintiff’s argument, the defendants were aware that broken blade retainers were consistently failing and causing engine damage, and this was known as early as 2000. In response to this knowledge, the defendant allegedly redesigned their jet engine, however the reason for the redesign was never disclosed, nor were customers advised of the old design defect. The jet engine manufacturer introduced a new engine design in 2008 and issued service bulletins advising that they have done so.

It was undisputed between the parties that the old blade retainers were defective; however, the defendant argued that customers were aware of this issue. The defendant denied fraud arguing that they made numerous presentations disclosing that the former engine design was defective.

After a prolonged jury trial a verdict was returned in favor of the plaintiff. The jury found that the defendant committed fraud by failure to disclose a known material fact and concealing essential information as intentional fraud. In response the plaintiff was awarded $1,395,626.53 for compensatory damages and the question of punitive damages was not considered at the time.

Understanding the Fraud Verdict for Failure to Disclose

The parties submitted on the fact that the blade retainers in the defendant’s old jet engine design were defective, so this issue was not presented to the jury. What the jury was required to conclude was whether the defendant knowingly concealed this fact from the plaintiff or otherwise failed to disclose known material information. After the presentation of evidence, the jury found that the defendant had knowledge of the defect and their failure to disclose this knowledge constituted intentional fraud.

Do you have questions regarding Fraud, Failure to Disclose or Aviation law?

Aviation law blogs are linked below:

For additional discussions on causes of action for Fraud and Breach of Fiduciary Duty please see links are included below:

For articles discussing Verdicts for Fraud, Constructive Fraud and Breach of Fiduciary Duty please see links are included below: