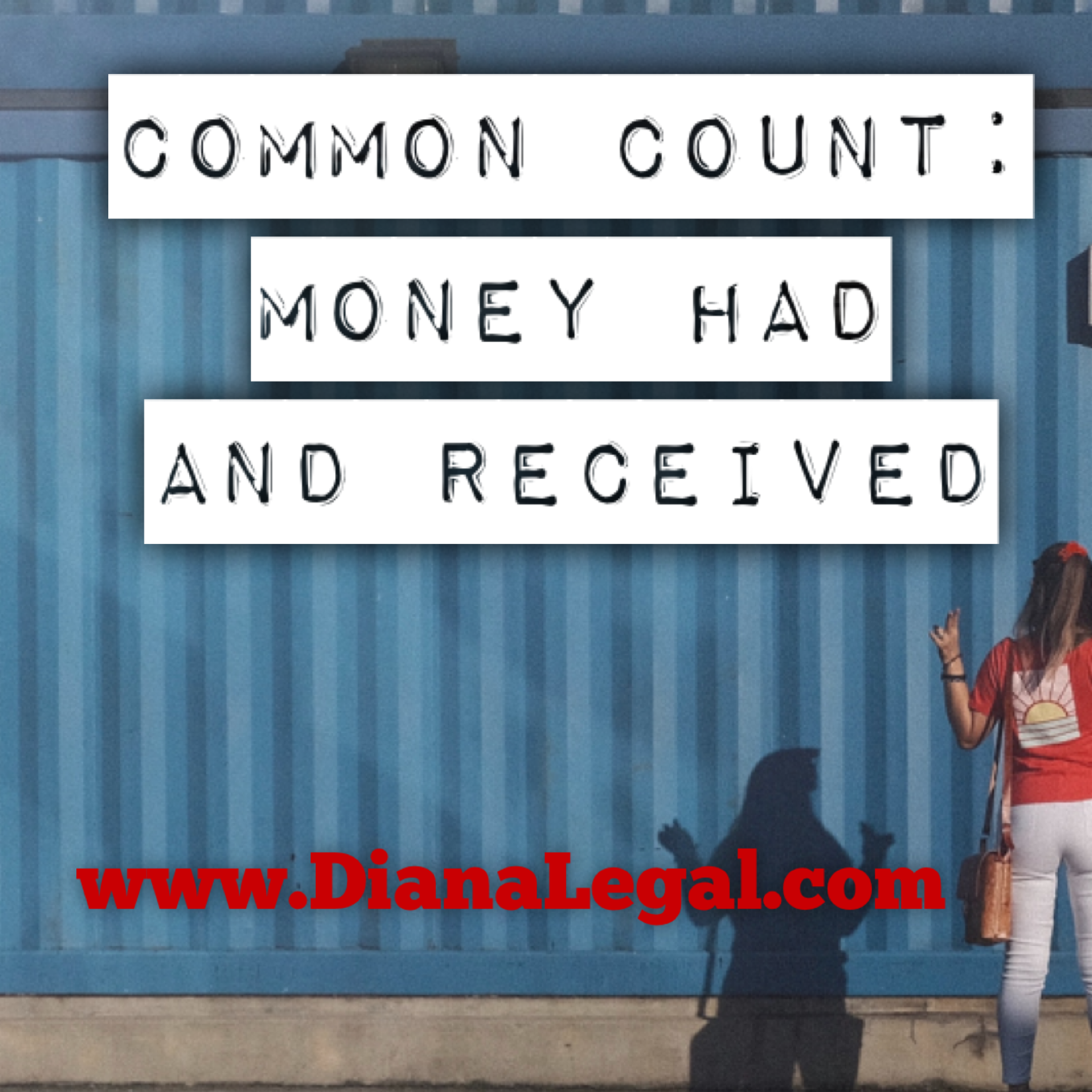 Money had and received is a common count, a simplified general pleading which seeks to recover money without specifying the nature of the claim.

Money Had and Received Definition

A common count action for money had and received, is one in which the pleading party alleges that the defendant has received money which in equity and good conscience, should have been paid back to the plaintiff. Bosworth v. Wolfe, 146 Wash. 615, 264 P. 413, 56 A.L.R. 1117.

According to the Black’s Law Dictionary, assumpsit for money had and received “[i]s of equitable character and lies, in general, whenever the defendant has received money which in equity and good conscience he ought to pay to plaintiff. Henderson v. Koenig 192, Mo. 690, 91 S.W. 88,91.”

Jury Instruction for the Common Count: Money Had and Received

“If a plaintiff claims that a defendant owes [him/her/it] money. To establish this claim, plaintiff must prove all of the following:

1.That defendant received money that was intended to be used for the benefit of plaintiff;

2.That the money was not used for the benefit of plaintiff; and

3.That defendant has not given the money to plaintiff.”

What is a Common Count?

Unlike legal causes of action, a common count is a general pleading in which the pleading party is seeking to recover money, without specifying the nature of the case. Common counts are claims of indebtedness, which are generally alleged in complaints with other causes of action. Having a general cause of action in equity such a money had and received, permits the plaintiff to recoup their money without losing the opportunity for recovery because a defendant has prevailed on a technicality.

Most often this cause of action is plead in the alternative in an underlying complaint. Typically, a common count for money had and received is plead simultaneously in a breach of contract claim, insurance bad-faith action, breach of fiduciary case and/or with an allegation of unfair business practices in violation of the unfair competition law (UCL).

Why include Money Had and Received?

The benefit of including a common count in a complaint is in the event the plaintiff is not able to prevail on other alleged causes of action due to a technicality, the trier of fact may still find for the plaintiff. Considering all the underlying facts and circumstances, a judge or jury may conclude that it would be unequitable for the defendant to maintain the money, in which case the plaintiff may prevail and possibly recover the money.

If a plaintiff pleads a cause of action for a breach of contract, however the trier of fact cannot find the existence of such a contract, there remains the possibility of prevailing under the common count. If the trier of fact finds that money was exchanged between the parties, and it is not equitable for the defendant to maintain the funds, then there could be a finding in favor of the plaintiff for the common count money had and received.

A class of card dealers sued their employer a casino for compelling dealers to participate in a tip-pooling arrangement. The plaintiffs alleged that casino patrons’ intent was to tip the dealers specifically and by the casino requiring the employees to place the tips in a mandated pool constituted unfair business practices in violation of the unfair competition law (UCL) and was a violation of the common count money had and received. At a motion hearing prior to trial the casino was successful in excluding most of the causes of action plead by the plaintiffs, however the court permitted the common count for money had and received to move forward.

The Plaintiff’s Case for The Common Count

The plaintiffs alleged that casino patrons intended the money they tipped to be the individual property of the dealers, not that of the casino. Plaintiffs went on to allege that they were forced under duress and as a condition of their employment to give “their gifted tips” to the casino.

The Defendant’s Case for The Common Count

In response to the plaintiffs the defense raised three points: (1) it is not illegal and there is no legislative intent to prohibit employer-mandated tip pooling; (2) the dealers were not able to establish that they had ownership or possessory rights to the tip money; and (3) the dealers were aware of the tip policy, including the method and purpose of the tip pool prior to their employment with the casino.

At the close of the evidence the trial court granted a nonsuit regarding the common count cause of action for money had and received.

In this case the Court found that the plaintiffs did not meet its burden. The plaintiffs did not prevail on a common count for money had and received because they never established ownership of the money and the required tip-pooling was a condition of their employment.

Considering these facts and circumstances it was equitable for the casino to mandate a tip-pool and it did not amount to a finding of money had and received.

Questions about Common Counts or Money Had and Received?