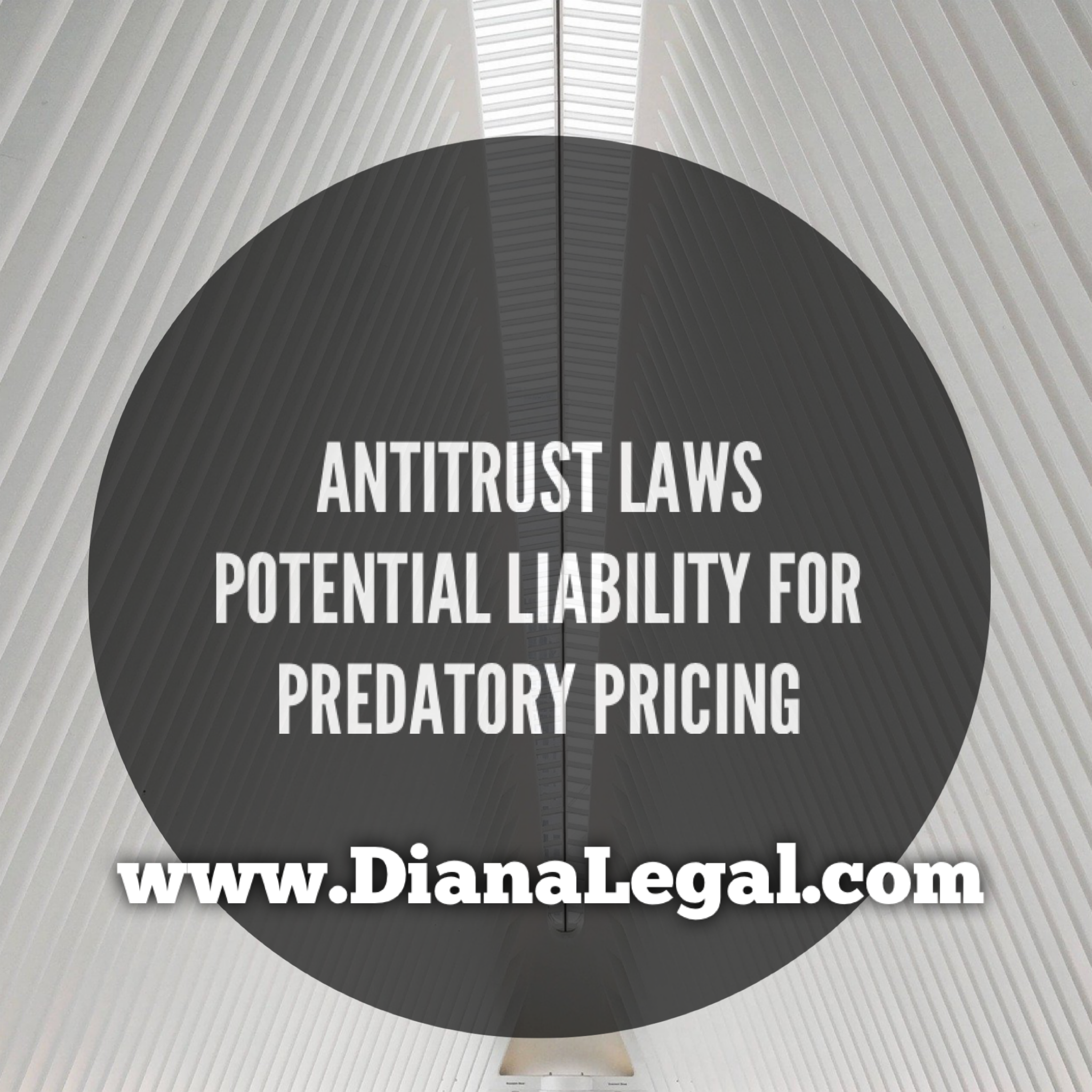 Antitrust laws per the Federal Trade Commission (FTC) include protection against predatory pricing or below cost pricing. As part of the FTC’s mission to protect American consumers the federal government via the department of justice and the FTC has the ability to protect consumers from unfair competition and reprimand businesses whom partake in predatory pricing.

Predatory Pricing, what is it?

The Department of Justice defines predatory pricing “in economic terms as a price reduction that is profitable only because of the added market power the predator gains from eliminating, disciplining or otherwise inhibiting the competitive conduct of a rival or potential rival. Stated more precisely, a predatory price is a price that is profit maximizing only because of its exclusionary or other anticompetitive effects.” This definition has been adopted by the precedent federal case coming out of the ninth circuit, William Inglis, Etc v. ITT Continental Baking Co., 668 F2d 1014, 1035 (9th Cir. 1981) (“….anticipated benefits depended on….tendency to discipline or eliminate competition and thereby….reap the benefits of monopoly power”).

Antitrust laws per the FTC “proscribe unlawful mergers and business practices in general terms, leaving courts to decide which ones are illegal based on the facts of each case”. Federal Trade Commission: The Antirust Laws

Antitrust laws are implemented with the intention of preserving and promoting market competition to foster innovation and protect consumers from predatory business practices and unfair competition in the market.

Unfair competition and antitrust laws are regulated at the federal level.  Specifically, the Sherman Act prohibits the monopolization of a market through “predatory pricing” and “below cost pricing”.  The FTC publication on predatory or below-cost pricing advises that: “consumers are harmed only if below-cost pricing allows a dominant competitor to knock its rivals out of the market and then raise prices to above-market levels for a substantial time.” The FTC in this instance is protecting smaller businesses from unfair competition by larger firms whom use low prices to drive smaller competitors out of the market in hopes of raising prices after the smaller firms leave.  In such instances consumers become dependent on the larger firms, specifically their products and services which have inflated prices as a result of unjust commercial practices. Federal Trade Commission: Predatory or Below-Cost Pricing

The Sherman Act outlaws “every contract, combination, or conspiracy in restraint of trade,” and any “monopolization, attempted monopolization, or conspiracy or combination to monopolize.” In-short this federal antitrust law prohibits harmful acts, specifically those wrongful actions that are harmful and detrimental to competition. Examples of corporate actions that violate the Sherman Antitrust Act include predatory pricing, fix prices, rig bids and market division.

The Federal Trade Commission Act bans “unfair methods of competition” and “unfair or deceptive acts or practices.” Under the FTC act, the federal government can bring cases against the same kinds of wrongful activities considered under the Sherman Antitrust Act including predatory pricing, fix prices, rig bids and market division; however, other wrongful practices that harm competition can also be brought by the FTC under the FTC act.

“The Clayton Act addresses specific practices that the Sherman Act does not clearly prohibit, such as mergers and interlocking directorates (that is, the same person making business decisions for competing companies). Section 7 of the Clayton Act prohibits mergers and acquisitions where the effect “may be substantially to lessen competition, or to tend to create a monopoly.” As amended by the Robinson-Patman Act of 1936, the Clayton Act also bans certain discriminatory prices, services, and allowances in dealings between merchants.” – FTC Antitrust Law  The intention behind the Clayton federal antitrust act is to prohibit conduct, specifically exclusive dealings and contractual relationships that are formed exclusively to hinder competition in the market.

Antitrust laws are typically considered federal regulations; however, many states have adopted similar antitrust laws that prohibit unfair competition in the market. Both state and federal antitrust laws can be enforced via private plaintiffs, including corporate and business entities in a civil litigation setting. Further private parties that bring a civil action for violations under the federal Clayton Act or Sherman Act are entitled to treble damages as well as a court order/declaratory relief prohibiting anticompetitive practices in the future.

Victim of an Antitrust Violation or Unfair Competition?

If you, your business or corporation has suffered a harm as a result of predatory pricing or other unfair competition practices, learn your rights.  We encourage you to contact our offices at 619-432-5145 for a free consultation with one of our antitrust lawyers and unfair competition attorneys.